At the beginning of the Dark Prophet Chronicles our heroes weren't yet the Chosen Warriors of Sigmar but low ranking members of the city guard. They mastered many small adventures as loyal guardsmen of the city of Thormaryll before the cataclysmic rise of the Dark Prophet took place which forced them to hide for many years in a hamlet on the eastern coast of the known world, protecting the adolescent Sigmar from the grasp of darkness.
Impressions from the Past: A Murder Mystery

The big picture started to emerge (more or less) when a murder unraveled a power-play within the most powerfull organized crime group of Thormaryll, the Nightshadows. Their leader, Ervan Trago, and his second in command, Dorza Vance, battled for supremacy.
Our heroes investigated that murder. Here are some images from the day the murder mystery adventure took place: 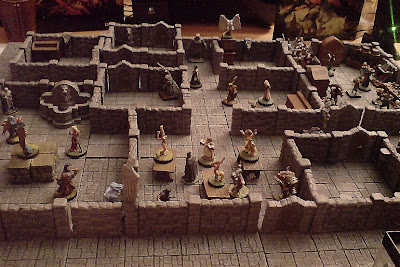 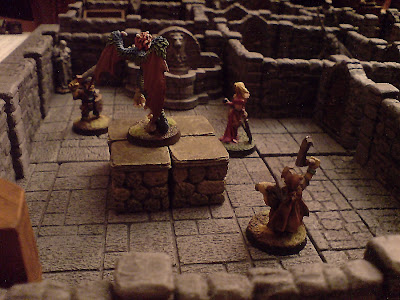 In the end they caught the bad guy,  he was one of Dorzas men. His victim was a fellow member of the Nightshadows.
Many adventures followed after that one. The group had several encounters with young Sigmar and his Father who became sort of a friend to the group. In one of these adventures the group witnessed the young Sigmar bringing a slain guardsman back to life, a task unknown to be performed by even the most powerful mortal. It was a legendary power said to be only wielded by the gods. But before this great event could be discussed any further the great darkness reached Thormaryll.
In the end Dorza lost the power-play. He was brought to justice and hanged for the many crimes he committed. No one at the time suspected that his death was actually planned by him as the final element in an citywide dark ritual that brought the dead to (un-)life, spreading terror, panic and havoc throughout the city.

When the Dark Lord Desmodar, the Prophet of Ba'al, conquered the city he raised Dorza as an undead and made him the new Lord of Thormaryll.


The Clergy of dead Gods

When Thormaryll fell the group was not present. When the signs of the coming apocalypse could no longer be denied one the priests of the old gods traveled to a secret temple to seek answers. As members of the city watch the group was ordered to protect the priest on that journey. Over the course of that adventure the group learned one of the most dire secrets of the clergy of the old gods:
For generations the clergy held women with the gift of second sight captive in a hidden temple. They drugged the women to induce the visions while acolytes carefully wrote down every spoken word, so that the high priests could use these auguries for their own agenda, telling the people they recieved guidance from the gods.
At the same time the group learned that the temple had been conquered by a small forces under the banner of Lord Desmodar and that the only remaining seer in the temple should be sacrificed to the Red Prince.
Deeply shocked about the lies and crimes of the church the group entered the temple through an underground side entry and rescued the seer.

The story continues in Background Story Part III: The Rescue of the Seer