After discovering deep-rooted discontent in the ranks of the undead the templars came into the knowledge that the once mighty Bane of the Living is now enslaved to the will of the Dark Prophet Desmodar. After their undying leader, the Lich King, was defeated by the Dark Lord and imprisoned in the citadel of unlife deep in the primeval forest from whom no living has ever returned, the undead became mere thralls to the will of Lord Desmodar.
A General of the undead army, the vampire Lord Karsakas, is secretly still loyal to his undying leader, the Lich Kind, and eagerly awaits a possibility to rebel against the Dark Lord. He had heard rumors of Angels send out by a newborn God to fight against the Shadow. His spies had observed the Templars from the moment as they reached Mortheim and he is impressed with what he has been told. Now he wishes to see with his own eyes if these supernatural creatures of legend the rumors speak of are truly before him or if these Knights of Sigmar are mere mortals. If they could pass a test of might he would give them the fourth Seal of Death and offer them an alliance against the Dark Lord. The Templars, desperate and running out of time, agreed to the test. All they need to do is find Lord Karsakas in his keep and not be killed on the way. With weapon and shield at hand, they entered the castle. 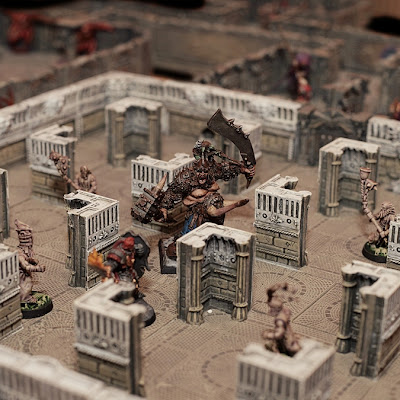 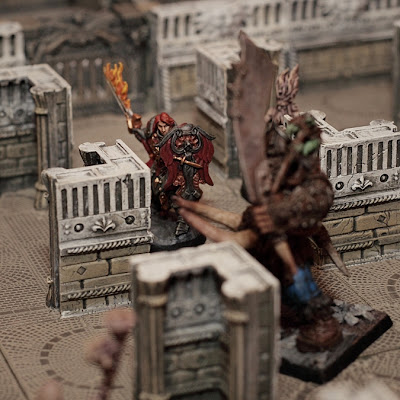 The Templers survived the ground level of the keep but did come close to death more than once. The healing power of Sigmar restored their life on several occasions but without time to draw breath and pray to restore the holy might no one can say if what lays before them can be mastered. But their faith is unshattered and so they continue their quest to find Lord Karsakas to whatever end awaits them.
Posted by CK aka Kronos at Sunday, December 04, 2011

What company makes the terrain you use? Great photos!

I think most of the terrain is made by DwarvenForge, isn't that right, Kronos?

Whoops, I didn't see the comment. Yes, it's Dwarven Forge. :)