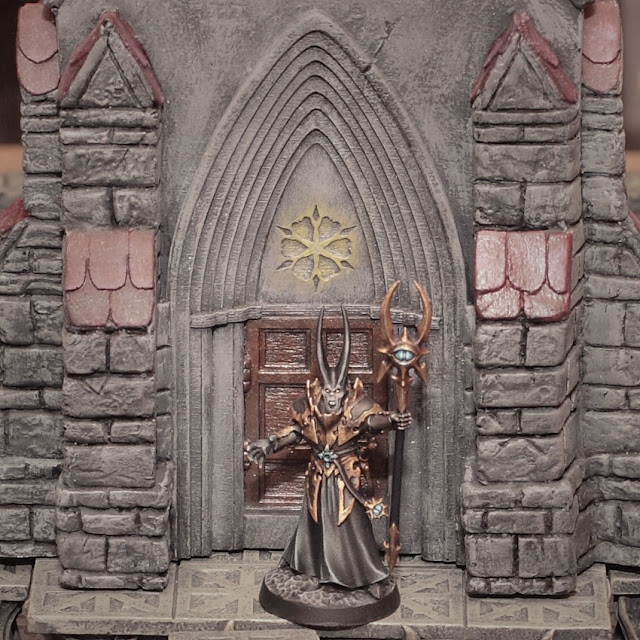 After exploring the caverns beneath the bandit infested keep the Templars discovered the broken down entrance to an ancient Eldar temple. The Templar explored the Eldar Temple and found a gigantic and highly ornamented  hall with a huge black obelisk in its centre. Icons and marks on the obelisk told the story of the destruction of world through the forces of the Red Prince Ba'al. It seemed that what happened right now on Terra had happened before on thousands of worlds.
In every world it began with a mortal, called the Anointed One, who would summon the Red Star, the demon Belakor, who would bring forth the Dark Prophet - a mortal who would be worthy to be the Chosen of Ba'al and the Bringer of the Apocalypse.
On Terra, the Dark Prophet was the human Desmodar who conquered all of Terra for the glory of the Red Prince. The insignia on the obelisk said that the priests of Shadow would build dark temples all over the world, sacrificing the blood of the living to open a gateway for the Red Prince so he could enter the world and feed on the living until there was nothing left but a broken wasteland and he would travel to the next doomed world to feast again.
Following the events described on the obelisk the next thing that would need to happen in the dark tradition of the demonic apocalypse was the summoning of Krull, the son of Ba'al and Herald of Hell. Only after Krull had feasted on the flesh of the world and deemed it worthy would the Dark Prophet be granted permission to summon the Red Prince and in doing so bring forth the Apocalypse. 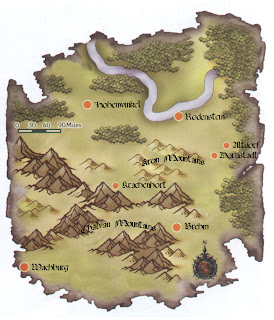 There were secrets in the insignia of the obelisk but the Templars were not able to decipher the rest. But what they just learned filled their hearts with fear and anger. This dark age of Terra could very well be its last.
The Templars left the Eldar temple and made their way back to the surface and back to the remains of the bandit camp. All this did not seem to be in direct connection with the disappearance of the Lord Inquisitor Reigen so they decided to travel back to the nearest city (Dornstadt) to inform the Lord of the region about the recent discoveries. They made a quick detour to the ghost town of Altdorf because they heard (during their investigation of the disappearance of the Lord Inquisitor) that there were sightings of strange beings in the near forests. Altdorf was orphaned during the war against the forces of the Shadowlord Fa'zhul three years ago and rumors told stories of ghosts roaming the burned buildings.
The Templars didn't encounter any ghosts but discovered a ruined castle in the dark forest nearby. After observing the castle for a few hours from afar the Templars learned that it was inhabited by Orks and decided to sneak into the castle to gather some more information. After successfully sneaking into the castle they discovered that the main building inside the castle was a black church. Before they could investigate any further they were discovered and a huge battle with the stationed forces was unavoidable. 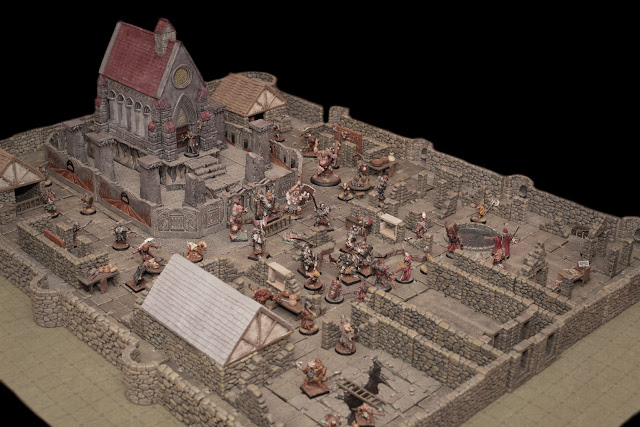 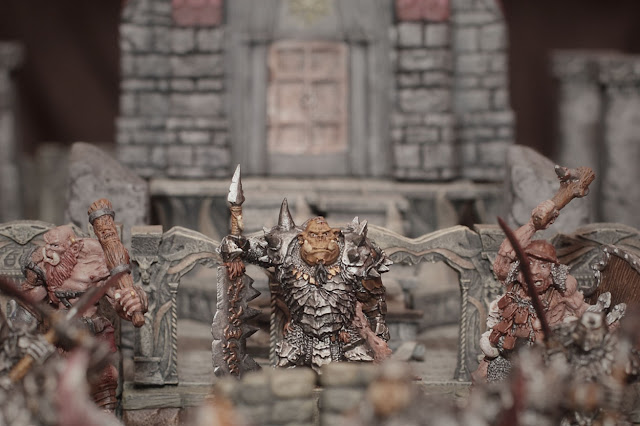 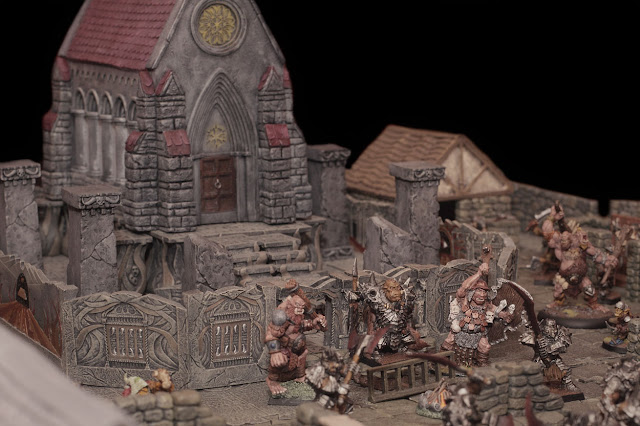 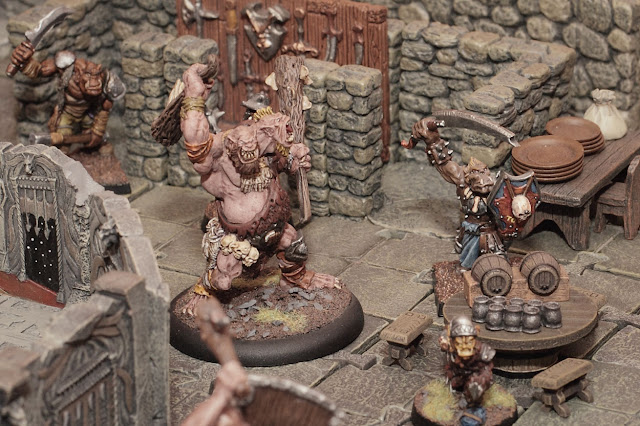 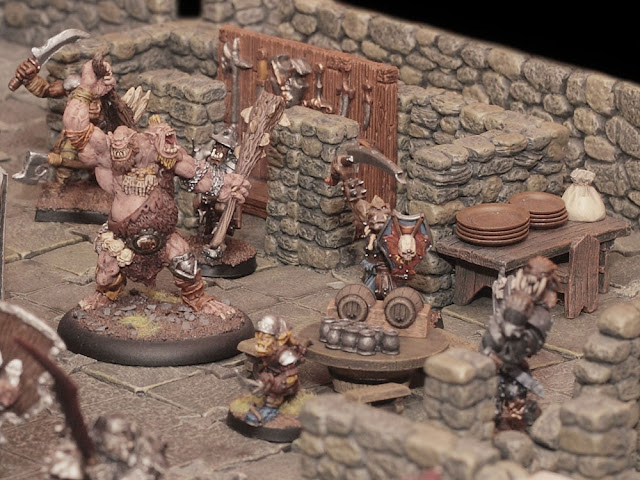 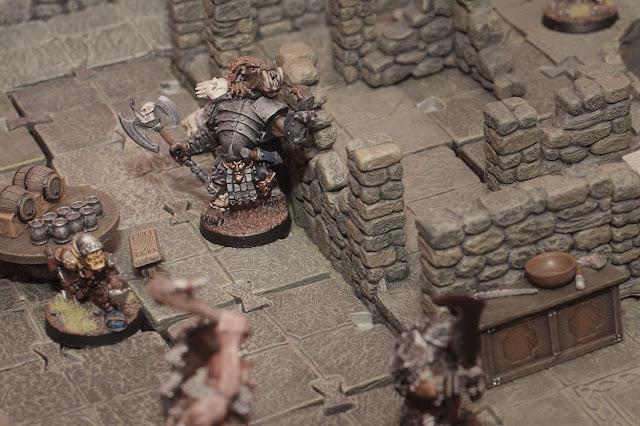 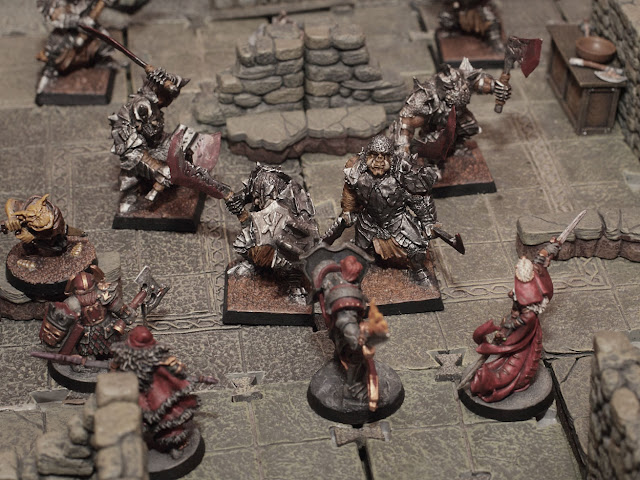 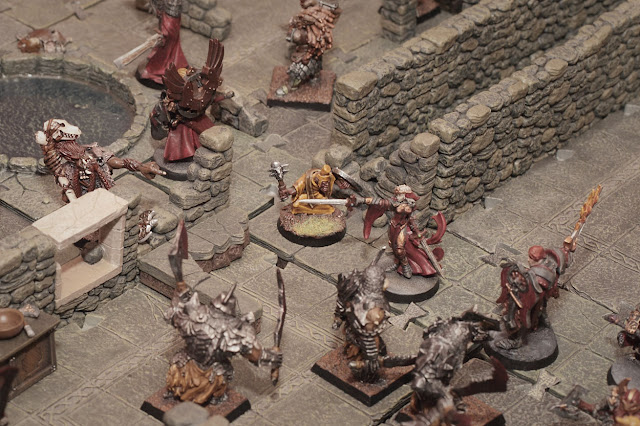 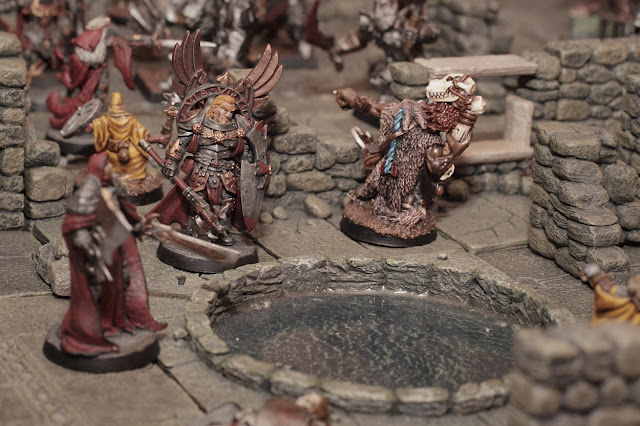 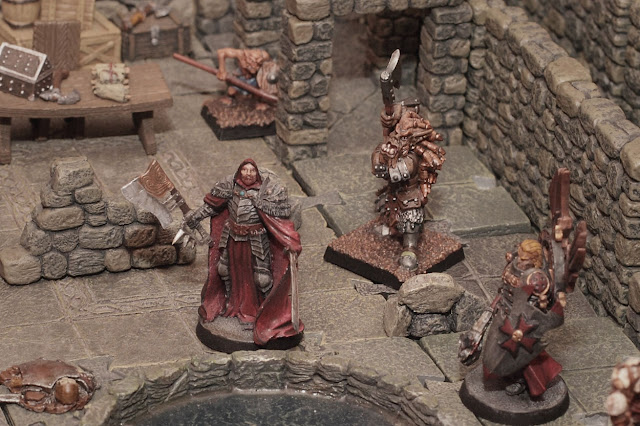 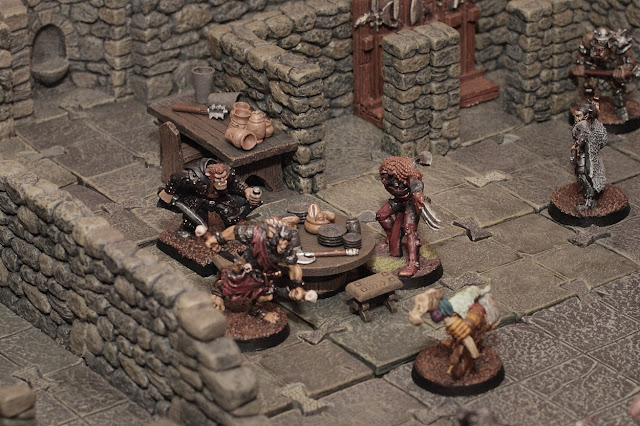 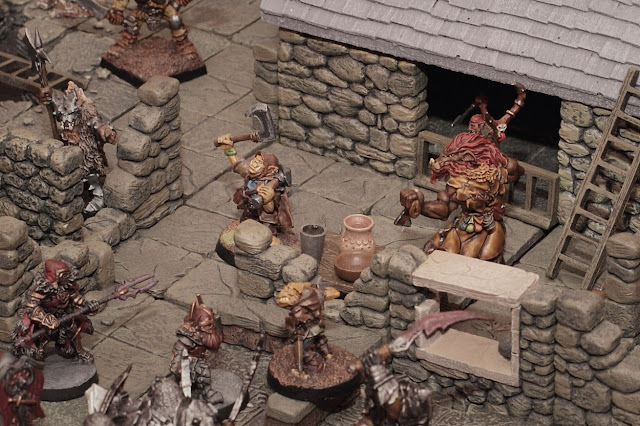 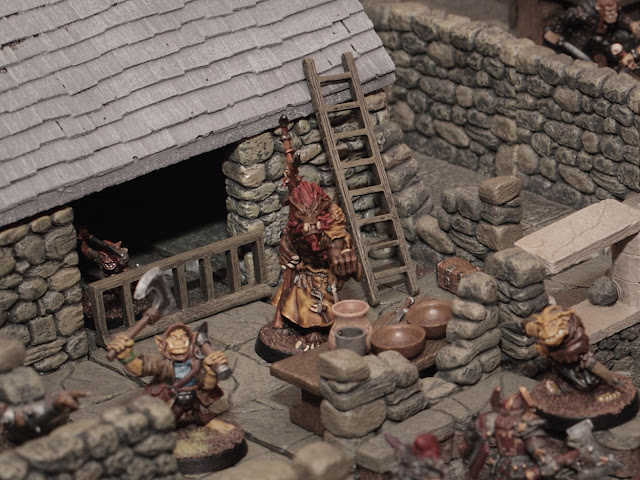 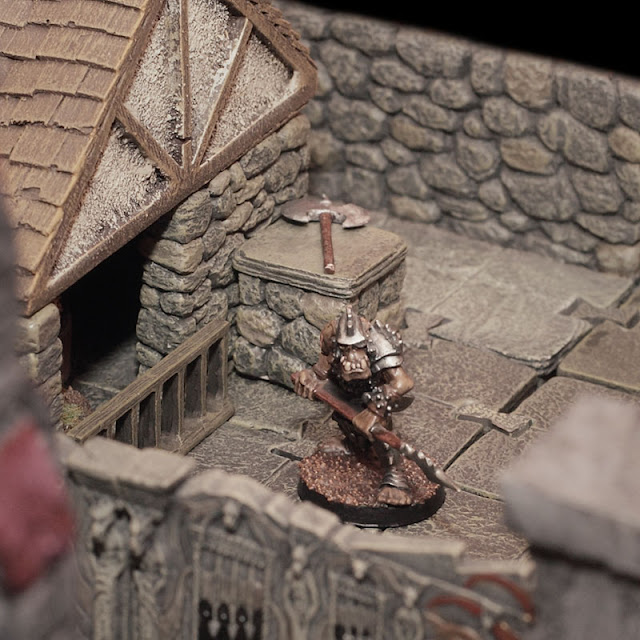 During the battle a demonic figure appeared on the steps of the Black Church but did not act until the battle was over. At this time he introduced himself to the victorious Templars, who were exhausted and badly wounded, as the Anointed One. He explained that he did not come to this place to fight but to help them to fulfill their destiny as Apostles of the Apocalypse. It was their duty, he said, to inform the world of the coming of the Herold of Hell, Krull, the Son of Ba'al and great Destroyer of Worlds and in doing so bring forth a champion of Ba'al who would have the honour the perform the summoning ritual.
Three large armies lead by contenders battling for the prestige to become the one to summon the Great Destroyer were already in place and had started a bloody conflict with one another. But traditionally, the demon said,  there should be always 4 contesters for this position and he had chosen the Templars to bring forth the fourth contestant and to bring him to the old Temple in the Talvan Mountains so that the battle for the position would be carried out in order with the apocalyptic tradition.
The Templars were stunned by what they had heard. But their outcry of anger as well as their eagerness to attack him did not seem to impress the Anointed One who disappeared in a cloud of fire and magic.
After praying to the God-Emporer and receiving the blessing of healing the Templars searched the castle. They were unable to open the bronze doors of the Black Church. The 8 Pillars surrounding the Church told the story of the coming of Krull through these cursed doors. It seemed they had found the Place of the final summoning ritual for the Son of Ba'al.
The Templars quickly traveled back to Dornstadt were they send out messengers to all great cities of the region to inform the Lords and Ladies of the current events.
Over the course of the next two weeks an army of a thousand men was gathered and led by the Lord of Rodenstein to the Castle of the Black Church. A force of 250 men were stationed there while Members of the Holy Inquisition investigated the pillars as well as the Eldar temple under the ruined keep where a force of 50 men was stationed. The main force of the army was led into the Thalvan mountains to battle these eager to be Champion of Chaos and their armies and to prevent the summoning of Krull, the Destroyer of Worlds.
The Templars were traveling a few days ahead of the main force, gathering more information about what was happening in this region. All the current events did not help to shine a light on the disappearance of the Lord Inquisitor and they kept it secret that they were still searching for him.

The mood was darkened in these days of traveling. Not only were the forces of Chaos already present in the region but the fact that they were ignoring the forces of the Empire of Mankind left only the conclusion that they did not even care about them anymore. It seemed like for them the battle of Terra was already over and the only thing left was to determine who could count himself among the greatest victors and champions of this conquest.
As if that would not be devastating enough it seemed impossible that any kind of greater force let alone several armies of the Dark Prophet could come into this region and stay undetected for such a long time without the help from someone inside the Empire.
And if this would not be worrisome as it is the Templars feared that they unwillingly fulfilled the roles as Apostles of the Apocalypse, as the Annointed One called them, by informing the Lords and Ladies of all this even though they had no intention of doing his will. It seemed there were so many things in motion outside the influence of the Templars that it seemed impossible for them to get the upper hand.  So they prayed while traveling into the Thalvan mountains, hoping to find this hidden Bastion of Chaos - and to kill everyone inside for the glory of the God-Emperor.
Posted by CK aka Kronos at Sunday, September 30, 2012