I decided to finish up some my new undead miniatures after a good game night with my group (a new battle report is on its way). I'm pretty pleased with the look of the Empire Flagellant Warband as wicked ghosts. To give them a little something extra I used the Bone Fields beveled bases from Secret Weapon Miniatures and added Vallejo Still Water to the bases. The Still Water was mixed with Game Color Inks Green and Brown to give them a really gruesome look (one of the many great things I've seen over here at Awesome Paint Job).

Here you can see the miniatures approximatly 1 hour after I added the still water. It needs another 23 hours to get its final look but you can already see where this is going: 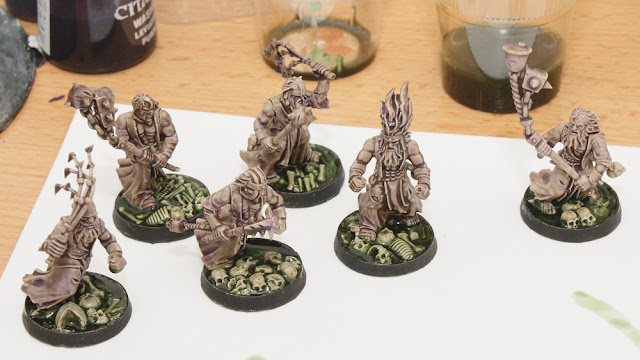 The Bone Fields beveled bases were initially planed for my new demons but now I like them way more for my undead army. And I've already put my eyes on another cool line of bases for my demons which made it a pretty easy decision in the end. ;)
Posted by CK aka Kronos at Monday, August 29, 2011